Waste Stories is a project using the affective power of story-making to try to change people's relationships with waste and the resources that end up in the waste stream.

Waste is one of our biggest challenges. The volume of waste we produce and the ways we dispose of it have a significant impact on both local and global environments, through direct pollution and energy used in transport and processing).  In Scotland, despite policy efforts, there is still a long way to go. Since 2015, Scotland has produced 2.4-2.5 million tonnes of household waste each year and although the fraction that is recycled has increased, the increase has been marginal (from 41.1 to 44.7%).  In order to further decrease waste going to landfill, and to reduce the energy costs associated with recycling, more needs to be done to reduce waste in the first place – a change that relies on increasing and innovating rejection and reduction of waste as well as re-use and re-purposing of resources.

Creative change can best be achieved when we use our embodied emotions, as well as our intellects, to spark our imaginations. Waste Stories recognizes the power of story-making and story-telling, through creative fiction and poetry, to elicit strong emotional as well as intellectual responses. We also recognize the importance of the bodily/affective in turning such emotional responses into action. Our approach is influenced by sociomaterial sensibilities that emphasise the interconnectedness of the material and the social. In particular, we conceptualize encounters with both waste objects and Waste Stories as assemblages in which knowledge and affect can flow in a learning process that seeks to empower rather than constrain or reproduce.

Working with people in a range of roles and at different life stage, we hope to help them generate new ideas and practices through their own Waste Stories. 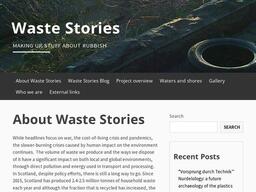