The EU is the global leader in development policy and aid, and was an active contributor throughout the process of the development of the Sustainable Development Goals (SDGs). In June 2016 the EU released Shared Vision, Common Action: A Stronger Europe, the EU’s Global Strategy for its Foreign and Security Policy. It aims for global prosperity and speaks about building resilient societies which require fulfilling the SDGs worldwide.

Then, in November 2016, the European Commission released a statement for the EU institutions: Proposal for a new European Consensus on Development: Our World, our Dignity, our Future.

The paper outlined a framework for implementation of the SDGs under the priorities of People, Planet, Prosperity and Peace, and emphasised that the Goals can best be met through enhanced cooperation of the EU and its Member States which is possible only through the EU integration process. This paper reviews the importance of EU integration in facilitating the EU’s emergence as such a significant partner in global development. It seeks to set up a conceptual framework for considering the role that the EU might play in the implementation of the SDGs in Asia Pacific. In this respect, collaboration will be essential, not only amongst EU partners but also with Asian and Pacific nations.The principle of collaboration was reinforced for EU Member States and Asian nations at the ASEM Leaders’ Summit and Foreign Leaders meetings in 2016 and 2017. Their Declarations have highlighted the importance of the SDGs and of partnership in implementation. Given this approach, can the EU play a key role in working with nations in Asia Pacific to meet the targets of the United Nations’ SDGs? To what extent do the impending changes in the EU budget for 2021-2017 effect this capacity?

A copy of both the EU policy documents mentioned above are featured below and attached...

IMPLEMENTATION OF THE SUSTAINABLE DEVELOPMENT GOALS IN ASIA PACIFIC: A ROLE FOR THE EU?

Lunch will available. To book your place contact cradall@glasgow.ac.uk 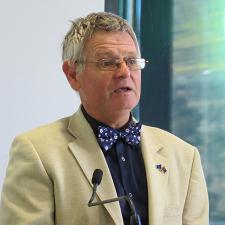 Professor Bruce Wilson is Director of the European Union Centre at RMIT University, and a former Co-Director of Pascal International Observatory. He provides insights to EU-Australian relations and academic studies on the European Union, encouraging mobility for staff and students, and builds partnerships between Australian universities, businesses and organisations and their European counterparts. He also leads two major research programs, one on the EU’s role in the implementation of the SDGs in Asia Pacific funded under the EU’s Jean Monnet program and within which Michele Schweisfurth and Mike Osborne are collaborators; the other is on comparative regional policy in Europe, Australia and Asia, looking at interventions to promote innovative economic development and human capability that improves the living and working conditions of people in metropolitan and rural city-regions. Insights from this latter work can be found in A new imperative: regions and higher education in difficult times, published by Manchester University Press in 2013 with Chris Duke and Mike Osborne.

Gender, sustainability and research capacity building in the Global South

Global Learning Festival - 8-11 November, 2021
Invite to the launch of the FACE and SOAS Access Podcast
Work-o-Witch New Article: The old fear of the end of new work itself
END_OF_DOCUMENT_TOKEN_TO_BE_REPLACED

Precarious work and future careers in the context of the gig economy in South Africa and China
The Art of Transdisciplinary Research Communications: Sustainable Futures in Writing
Professional Learning Communities (PLC) in the Global South: a Systematic Literature Review
END_OF_DOCUMENT_TOKEN_TO_BE_REPLACED