Dr Muir Houston, Deputy Director of CR&DALL opened the webinar and provided an overview of logistics for the 80+ delegates and panellists. Professor Ellen Boeren, Deputy Director of Research in the School of Education, began formal proceedings, explaining that adult learning and youth transition is a core and important theme of the School.

All of the projects presenting have an investigator who is a core member of the Centre for Research and Development in Adult and Lifelong Learning, whose website she recommended visiting (http://cradall.org).

Prof. Catherine Lido presented the work of the EPSRC-funded Inclusion matters project VisNET on behalf of the team at Glasgow, Edinburgh and Strathclyde universities. Catherine introduced the work, which aims to address gendered inequalities in academic STEM, namely by addressing strategic networking and international collaboration with online tools and support.

The talk began with a discussion of the central role of networking in academic success and promotion, proceeding to the project's e-interventions, and discussion of mixed-methods findings on the implicit and explicit barriers identified, as well as facilitators of network growth using Social Network Analysis of their mapped professional network. The talk including with practical priorities for improving digital footprints, increasing effective online networking and the deployment of collaborative tools, as well as mentoring and CPD training for more explicit approaches to strategic network growth amongst early-career women in academic STEM.

Can dual apprenticeships create better and more equitable social and economic outcomes for young people? A comparative study of India and Mexico

Drs. Srabani Maitra and Judith Jacovkis presented their research on Dual Apprenticeships in India and Mexico funded by the UK’s Economic and Social Research Council (ESRC) within the Global Challenges Research Fund (GCRF).

The project aims to understand why and how lower- and middle-income countries like India and Mexico adopt the Germanic model of Dual Apprenticeships. In the webinar, Srabani and Judith gave an overview of the project, highlighting how the study develops a comprehensive research approach that scrutinizes the different, but mutually constitutive stages of policy transfer, from the adoption and recontextualization of dual apprenticeships in national programmes to their implementation and impact on social inequalities in multiple local contexts.

Through in-depth interviews with policymakers, employers, unions, teachers and young students enrolled in Dual Apprenticeship training in India and Mexico, the project seeks to raise awareness in the following areas a) increased involvement of employers in vocational training programmes; b) greater alignment between training and industry requirements; and c) increased employment opportunities for young people in vocational education, especially those coming from marginalised backgrounds.

The presentation was also attended by Ms Soma Mitra Mukherjee, Deputy Director of the Bengal Chamber of Commerce and Industries (India) who emphasised the significance of the project and its contribution to the understanding of the skill ecosystem as well as associated challenges of skill mismatch and youth unemployment in India and globally.

Presentations from Dual Apprenticeship in India and Mexico

Policies supporting young Adults in their life course. A Comparative Perspective of Lifelong Learning and Inclusion in Education and Work in Europe

Against the background of high fragmentation and persistent weakness and ineffectiveness of adult education policies across Europe, Dr Oscar Valiente explained that the project, Policies supporting young Adults in their life course. A Comparative Perspective of Lifelong Learning and Inclusion in Education and Work in Europe” (YOUNG_ADULLLT) funded by the European Commission with the H2020 research programme set out to enquire into the specific forms of embedding of these policies in the regional economy, the labour market, the education/training systems and the individual life projects of young adults.

At the focus of attention of the project has been lifelong learning policies aimed at creating economic growth and, at the same time, guaranteeing social inclusion through targeting young adults in vulnerable situations, for instance, those not in education or training (NEETs) or those in situations of near social exclusion. The international comparative project starts at this point by focusing on the various lifelong learning policies (LLL) for young adults and analysing their potentially competing (and possibly ambivalent) orientations and objectives.

The objective was to yield insights into their implications as well as intended and unintended effects on young adult life courses. YOUNG_ADULLLT aimed at critically analysing current developments of LLL policies in Europe in order to prevent ill-fitted policies from further exacerbating existing imbalances and disparities as well as at identifying best practices and patterns of coordinating policy-making at the local/regional level.

To view a recording of the Webinar, click this link or the image below [pending]: 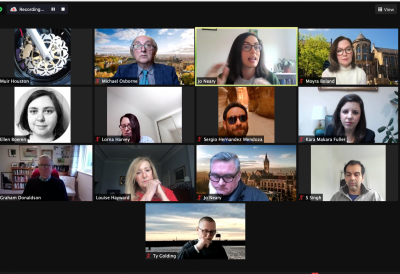 There followed some initial responses from a panel of collaborators and beneficiaries.

Dr Katie Nicoll Banes from eBase, Edinburgh, argued that the establishment of networks with business is highly relevant for research, echoed what Prof. Lido had presented. She suggested that the current pandemic could represent an opportunity and not simply a disaster, and cannot be used as a reason to prevent future progress. Crises can drive change and they have seen such opportunities through rapid response calls for funding bids as a prime opportunity to increase diversity.

Soma Mitra Mukherjee presented the massive demand for skilled human resources in the manufacturing sector in India. She reported the convergence between academia and industry has been crucial in recent years in India, where the Chamber of Commerce has played a determinant role in policy advocacy. She highlighted the importance of policy implementation as part of research efforts in India.

Can you please explain a bit more about the role of peer mentoring (in the VisNet project), not just in terms of collaboration, but maybe also another area like learning or research, for example

Dr Catherine Lido replied that the team has started a paper on mentoring. She said that they have created small mentor groups and it has been an interesting aspect of the work. Referring to higher education transitions she indicated that people need to know why they are making these transitions because it is not clear that transitional and well-being support actually leads to achievement. There needs to be very clear expectations about what mentoring is and what to expect from it.

I wonder whether the study focused on specific populations in Mexico and India like very urban citizens and where is actually the voice of the indigenous people?

Dr Maitra said that in both countries young people that they were interviewing are from vocational education institutions and typically come from very marginalized backgrounds. In India, the students are from very, very marginalized backgrounds. There are more young men than women so gender definitely is an issue, that’s why they are trying to incorporate as many women as possible amongst their interviewees. In Mexico also, young people come from marginalized backgrounds and some are indigenous. She indicated, however, that the representation of indigenous students overall is quite low they are being included as much as possible in interviews. Dr Jacovkis also referred to the question by mentioning that the population in both countries is basically urban and don't move a lot to enrol in their studies. She confirmed that in both countries, most students are from low socio-economic backgrounds.

According to your second main finding of your project, does this mean that some LLL policies kind of trying to blame individuals' failures or problems for their own innate abilities or deficient rather than considering the structural disability?

Dr Valiente replied that for example we are very good at creating policy discourses policy documents and new government initiatives but we often find a mismatch in the diagnosed solution. For example, in a policy document from the Scottish Government there were two main problems: on one hand a group of young students struggling with employment because of the context of crisis, and on the other hand, a group of young people that have always been socially excluded. The policy solution was to develop skills for employability, but this was a mismatch with what had been diagnosed.

Where do you see this research project influencing future institutional decisions and actions?

Professor Lido indicated that this was a pertinent question since the pandemic also offers us the opportunity to change. It could be an opportunity to revert to stereotypes and learned ways of working. She referred to the importance, for example, of a recent announcement by the Vice-Chancellor of the University of Glasgow, acknowledging the inequitable treatment of BAME staff and students, and of the work that VisNet has been doing to combat inequality. She referred to an article from the project in Nature Index that provides 14 things that could fix gender inequality in HE. She concluded by saying that often we see the solutions to racism, discrimination and inequality at the individual level because it's much harder to change structures.

Dr Maitra mentioned that their project is divided into four work packages,  with two focusing mainly on trying to understand how policy adopters work at the national level in Mexico and India. The aim was to examine the logic behind the adoption of this particular Germanic model. The other package aimed at understanding the challenges in the implementation of this particular policy considering vocational institutions’ teachers, principals, trainers, employers and of course students. For example, In India, the adoption, was very much top-down from the national government, whereas in Mexico there is a strong collaboration between social actors, employers, and especially the Chambers of Commerce. Dr Jacovkis added that the different approaches yield different challenges.

Moreover, Ms Mukherjee mentioned that in India the government lacks the proper infrastructure and has implemented educational policies because education is largely the responsibility of the State governments

Professor Michael Osborne, Director of Research in the School of Education added some concluding remarks.

He shared three key messages concerning his learning during the webinar as follows:

Professor Boeren concluded the webinar by offering thanks to all who had been involved and encouraged everyone to attend the next webinar on 3 March 2021.